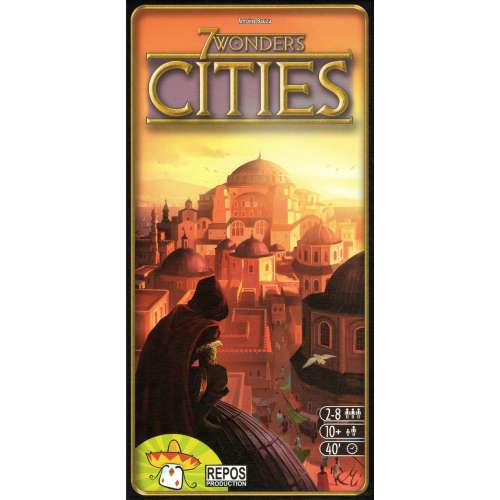 7 Wonders: Cities, the second expansion for 7 Wonders, includes optional team rules, adds an 8th player (base game supports 7 players), a new type of card (black, representing the remains of cities), and new cards of old types (two new wonders: Petras and Byzantium, 3 new guild and 6 new leader cards). This expansion is more aggressive, with greatly increased interaction between players, who are still trying to score more points than anyone else.

With the team rules, you can play with up to eight players, with the players divided into teams who sit next to one another so that they can kibitz and choose the cards of most use to them.

The new black cards have a variety of effects, with nine cards being available in each age.

Effects include:
The active player gaining gold, with his neighbors also gaining a bit.
Increased military strength in age 1 at a greater cost.
Embassy cards that remove you from the military competition for that age.
Cemetery cards that earn you points at the end of the game while costing opponents gold.
Spy cards that copy symbols from green (science) cards.
A secret warehouse that doubles a resource and a black market that generates a missing resource.
The ability to build cards for free by copying building chains from other players.